School Destruction After Every Monsoon 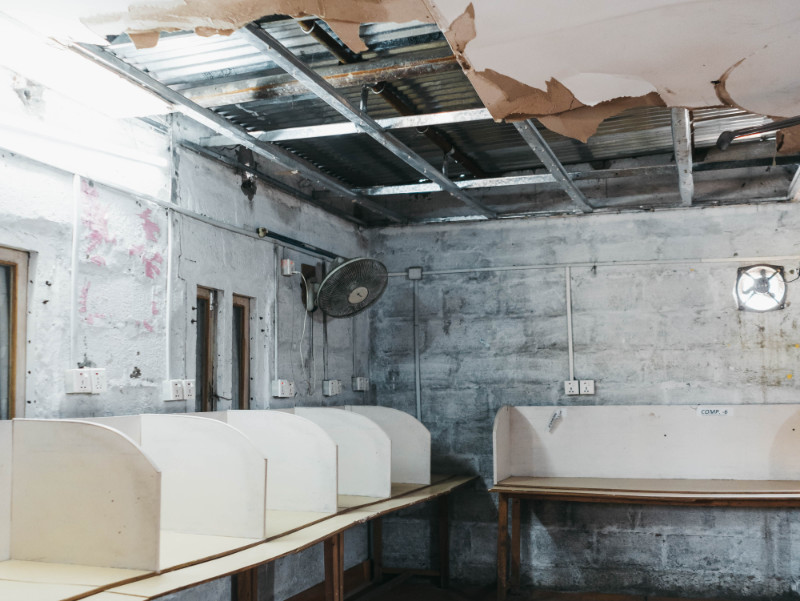 3 Angels Australia sent AU$20,000 after the previous bout of monsoonal damage. These funds have been maximally used replacing leaky old corrugated iron roofing, repairing dangerous exposed electricals, and replacing fallen ceilings and mouldy wall linings. It not only looked better, it was definitely safer. We hoped this repair would help things survive the next monsoonal onslaught throughout the Nepali summer, which is June, July and August.

It was not to be. The monsoons came way too early and were even accompanied by unseasonable and destructive hail. Within minutes a matter of minutes late Wednesday afternoon 30th April, the only section of the school that had previously not needed repairing was shockingly damaged and the schoolyard was covered in hail so deep it looked like snow!

The ceiling of the computer room was destroyed, and the computers rescued just before the entire room flooded. Books in the library were hurriedly moved as half its ceiling sagged with the weight of water about to pour through and wreak further destruction.

The fresh drinking water tanks (stored underground) were so filled with mud they were unusable until flushed out and refilled 4 times. Dawn Thursday saw the school principal and his staff doing fast clean up jobs to keep the school functioning for classes that day. Thursday afternoon and then again Friday, more ferocious hail storms and monsoonal rain brought a repeat performance and yet more damage. The monsoon season had not yet even officially started!

I was there when this happened and was very impressed by their resilience and strength through this ongoing battle. They need the new well-built school more than ever. I continue to be impressed that they get such incredible results at this school against such continuous difficulties. Imagine what they will do when they 3AN have no rent, next to no maintenance and a new school built and designed to withstand monsoons and earthquakes and last for generations. Funds now being spent on rent, repairs and maintenance will educate and save more lives.

All we need now is the help of many kind donors!