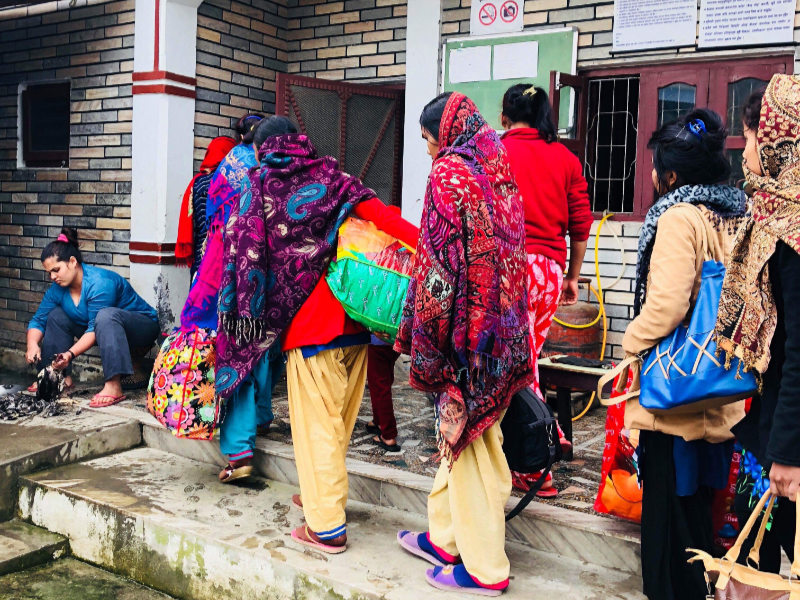 On April 10, 2019, Shirisha was drugged and forcibly taken from her home country of Nepal into India by traffickers.

More often than not, a story that begins this way invariably ends with no one ever hearing from or seeing the innocent victim again. Fortunately for Shirisha it did not end this way as she was rescued by 3 Angels Nepal. This is her story….

Shirisha decided to travel to Bharatpur, a six hour trip, in order to renew the faded picture on her citizenship card. When Shirisha’s mother-in-law learned that she was making the journey she asked Shirisha to do her a favor while on the trip. The mother-in-law lied saying that she was too sick to make such a trip, but that someone along the route owed her money, and she urgently needed help to collect the funds. The repayment was organized but the window to get it back was rapidly closing. The woman preyed on Shirisha’s kind heart and good nature, and Shirisha readily agreed to make a stop in Hetauda to retrieve her mother-in-law’s money from a man named Krishna Chaudhary.

At the age of 26, Shirisha lived an ordinary life in Dubichaur, Nepal. She was the devoted mother of two children and the wife of a loving husband who lived and worked in Malaysia in order to provide for their family.

Once Shirisha had finished her official citizenship card business in Bharatpur, she made her way to Hetauda and located Mr. Chaudhary. It had been a very long day of traveling and evening was closing in, so when Mr. Chaudhary offered Shirisha a bite to eat, she readily accepted. Unbeknown to Shirisha, Mr Chaudhary had laced the food she had just eaten with a sedative and she quickly lost consciousness. When she next opened her eyes, she was in an unfamiliar place. She was confused and unsure what had happened. She was offered a cold drink, and within minutes of drinking it, once again lost consciousness. The next time she became aware of her surroundings, she was horrified to find that she had been taken to Ranchi, India.

Understandably, Shirisha was terrified. Mr Chaudhary demanded that she call her parents to extort money from them. Shirisha refused, and over the next 45 days she was held in captivity and subjected to the most vile and unthinkable physical and mental abuse. Mr Chaudhary continually threatened Shirisha that he would sell her if she did not comply with every one of his demands. This was a period of deep anguish for Shirisha as she feared for life and thought she’d never see her family again.

After 5 weeks her captors left her alone for a few moments so Shirisha seized the opportunity and managed to place a call to her parents. Shirisha’s parents immediately contacted 3 Angels’ Chitwan branch and begged us to both intervene and to rescue their daughter. We collected all of the information that we could possibly glean from Shirisha’s parents, then immediately contacted both the local and district police departments to seek their assistance. Our next call was to the Nepalese Embassy in India.

Within a few short days, everything was arranged. The Embassy had located Shirisha and agreed to help us bring her home. Once 3 Angels team had rescued Shirisha, and brought her safely back to Dubichaur, Nepal, we housed her in transit home. Shirisha was overwhelmed and relieved to be safe at last, but the physical and emotional scars from her ordeal are huge.

3 Angels, together with government attorneys, set to work bringing a legal case against Shirisha’s traffickers. While filing a report with the local police station, members of Shirisha’s extended family that were involved in the trafficking scheme, came to the station and physically assaulted Shirisha. Further threats of violence against Shirisha meant it was not safe for her to return to her home, so we moved her to 3 Angels Safe Haven.

Shirisha is now safe and awaits the court hearing to prosecute the kidnappers and traffickers. She receives care and counselling and is supported as she participates in a beautician-training program that will give her independence and self esteem.

The ramifications of Shirisha’s ordeal are far-reaching as superstition and stigma surround victims of such crime in Nepal. One of the most tragic is that her husband refuses to speak with her, and his family will not allow Shirisha to see her children. Shirisha is heartbroken over this separation and especially so since her children are being indoctrinated to believe that as a result of what happened to Shirisha, she is no longer worthy of being a wife or mother.

The very people now keeping Shirisha from her children were involved in the conspiracy to abduct and traffic her. It is our fervent and committed objective to fight for justice for Shirisha. We will do everything in our power to see that Mr. Chaudhary and all of those involved in her kidnapping will be prosecuted to the fullest extent of the law. It is our hope that a legal victory will help to prove her innocence to her family and that reconciliation will be possible with her husband and children. She is currently receiving treatment at Safe Haven to help her work through the trauma of her 45-day nightmare and to be able to move forward with new skills and a new promising future. 3 Angels will continue to support Shirisha and to change attitudes in Nepal that not only ignore human trafficking but stigmatize the victims.