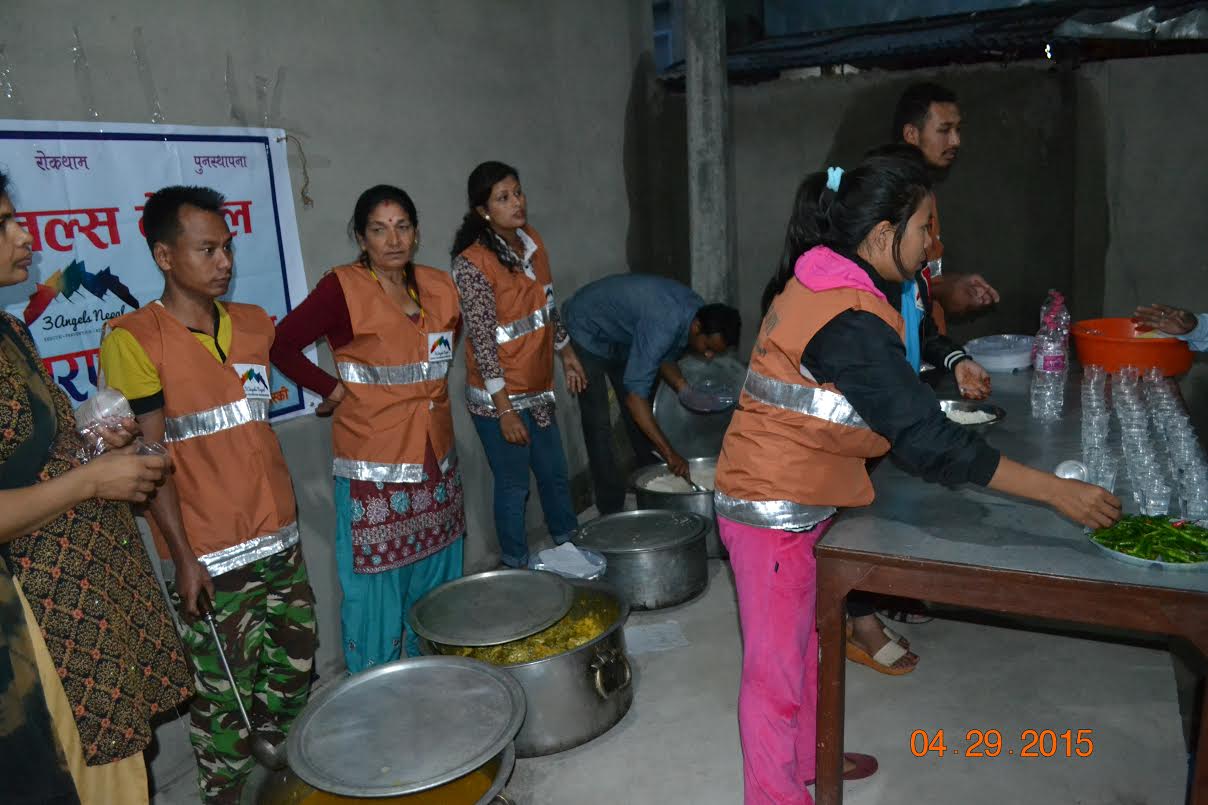 Everyone is pitching in for earthquake relief effort

We have received the following update from Rajendra and Helen and had the opportunity to speak to Rajendra this morning.

The Nepali Govt had asked 3 Angels to do the monitoring and assessment for all the hospitals in Pokhara, so for the rest of the day and into the night Rajendra and a couple of our other workers, and two Government men were checking at a total of six hospitals.  Giving a report as to how many earthquake patients, and how they were being treated and fed etc.  Mostly they were to concentrate on women and children.  Then they had to check two facilities for children as to how well the children were cared for and the availability of room for more children.  This is for children who may need to be cared for for some time or who may have been orphaned.

Around $1200 worth of surgical supplies was donated by 3 Angels to the GMC hospital, they had had to cancel all surgeries until they received our supplies.  This will be enough for around 40 operations.  The hospital also requested for a supply of sanitary pads.

Our kitchen that has been set up at the GMC hospital provided two good meals today to around 300 earthquake patients.  Yesterday it was 200.

Our team of 12 men arrived back today from Gorkha in the very early morning.  They had had two days and three nights with basically no food and no sleep.  It was a real learning experience for them, one does not realise how desperate people can get when they are hungry and thirsty.  Your life can be in danger, especially if someone thinks you are favouring someone or some caste or some families above others.

The weather has been quite cold at nights and it has been raining which has caused much misery for people without any shelter.  Many villages have not even one house that remains undamaged,  many people have died, in one village we heard that nearly all the villagers had died, maybe it was a landslide.  Some villages near to the China border are in real trouble as China will not allow any helicopters to be in the air that close to China.  Ganesh our radio man is from that place.  We need tents very badly.

The traffickers will be having a party, disasters are something they like very much.  Rajendra has asked our border workers to be even more alert and to take on extra staff if necessary.

One young man was telling Rajendra that he was part of a joint family of 17 people and now he is the only one left alive, he is wondering why.

Please keep everyone in your prayers, it is not an easy task for the guys going out into the field.   Pray for their protection please.

This update is mainly from Helen Eager. Rajendra was very emotional as I spoke with him this morning. The needs are so immediate and personal. Injured adults and children at the hospital, waiting for surgery that they cannot afford. Broken limbs and broken hearts from loss of family members. Villages in ruins, hungry children and mothers. Rain and cold nights do not make for comfortable or easy survival.

Let’s help as much as we can and keep them in our prayers.